RankedVote is a simple, fun way to run ranked-choice contests online. It's designed help you make better decisions, faster while also serving as a delightful introduction to ranked-choice voting concepts for both you and your voters. No matter where your voters are or what device they use, RankedVote allows them to quickly cast their ballots and understand the results.

And, although RankedVote's design is simple on the surface, its capabilities run deep.

With RankedVote's advanced features, you can unleash the power of ranked-choice voting inside your team, organization, or online community. You can make decisions you know have the strongest support. You're only limited by your imagination. You can do anything from select a next book for your book club to running voter education campaigns across the largest city in the U.S.

Read on to understand the full extent of what RankedVote has to offer.

RankedVote is focused on helping you use ranked-choice voting to run compelling contests, make better decisions, or educate voters.

When adding a new event to RankedVote, you can choose between these three types: "Contest," "Decision," and "Election." Each type features terminology on the page intended to make the voting experience clear to your voters.

The "Election" type has access to a more in-depth Results Explanation, Voter Languages, Real-World Candidates, and the Final-Five Election format.

If you make any mistakes while creating choices, you can always edit any choice's name. And, as long as no votes have been submitted in your election, you can delete choices, too.

The "Grid" ballot type is a digital version of the paper ballot used in Maine, New York City, and Alaska. It's ideal for voter education efforts. It allows voters to practice ranked-choice voting prior to getting into the ballot box for real.

Grid ballots also work well for elections with large numbers of candidates (think 12 or more) where the drag and drop ballot can become tedious.

All contests have a robust Results Page that not only tells you what you need to know (like who won), but also educates your voters about how ranked-choice voting works.

The Visualization shows you how the ranked-choice election transpired. You'll see the round-by-round dynamics of eliminations and vote redistributions — the heart of how ranked-choice differs from other election methods. Additional visualizations are available on "Elections" in partnership with RCVis.com.

For "Elections," the Explanation steps you through what happened during the election in plain language. Key concepts like "eliminations" and "exhausted" or "inactive" votes are explained in detail using the context of your specific election.

The Round-by-Round Details make it clear how each choice performed during each round. You'll also be able to see how votes were transferred to each candidate. 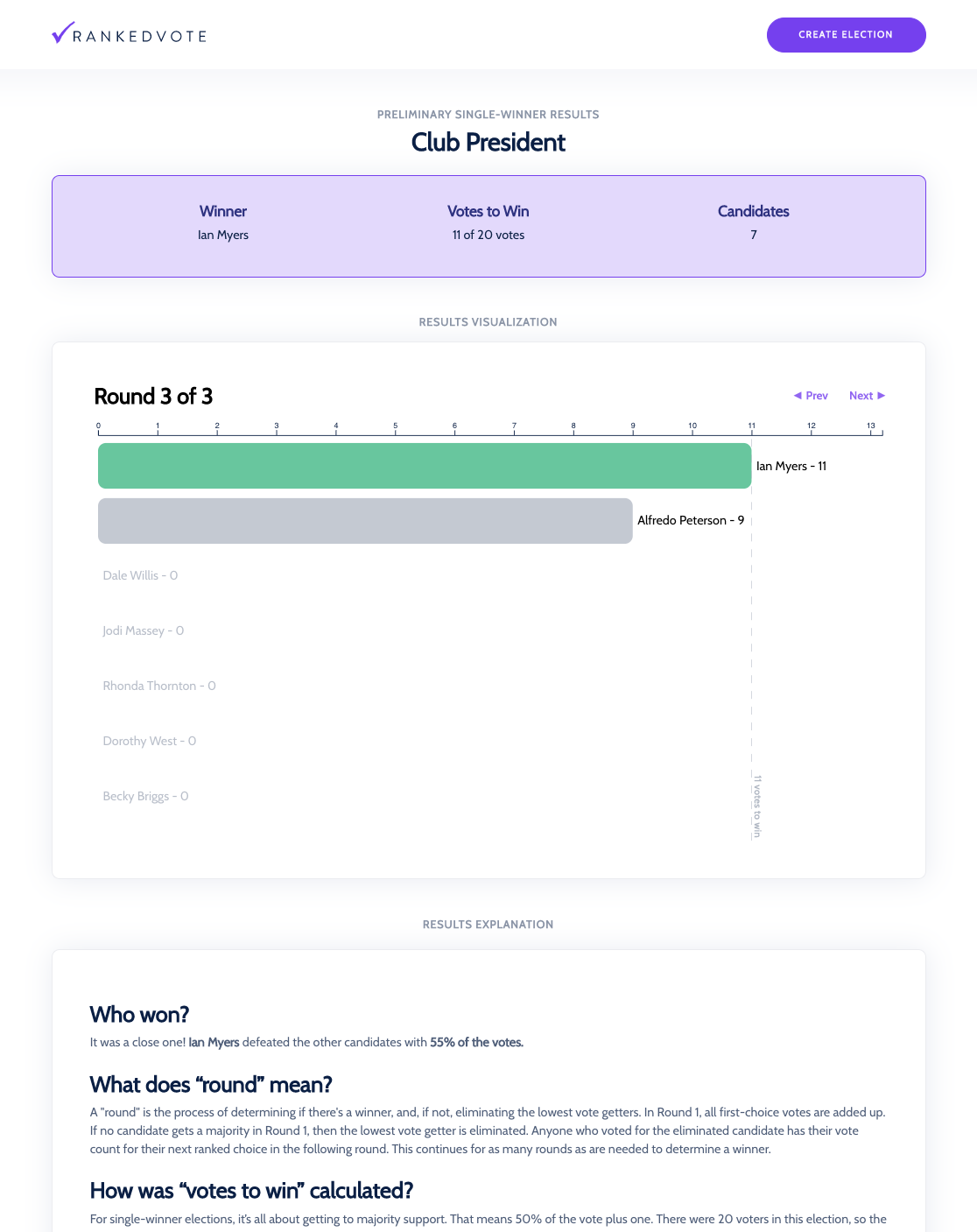 The Results Page for a sample election.

You can provide additional information to your voters through Group Affiliation and Description.

Group Affiliation (e.g. Team Name, Sophomore, Democrat) allows you to provide a meaningful label to a candidate or choice that appears directly beneath its name on the ballot.

Description allows you to go deeper on anything else you want to include about the candidate. Add context, biographies, answers to frequently asked questions, and even link to other relevant resources outside RankedVote.

There's a lot of power in being listed first. To eliminate this bias in your results, the order on the ballot is randomized each time a voter visits.

Setting this to a value greater than one allows RankedVote to discover the most acceptable choices to your voters. What's great is that nothing about the voter's experience changes. This is ideal for elections like "what are our top two priorities this month?" or "filling three seats on an open board."

In RankedVote, a Multi-Category Contest has a voter cast a vote for each category one after the other. For example, you could run a "Best Local Restaurant" contest with categories of "Breakfast," "Lunch," and "Dinner." After voting for "Breakfast," the voter would then immediately see the ballot for "Lunch" and so on.

If you're making a "Decision," this feature is called Multi-Topic. In an election, it is referred to as "Multi-Office."

You can read more about how to create your own multi-office elections or try it out yourself in this sample election.

When you only want members of your organization to participate in an election, you can take advantage of the Allowed Voters and Voter Registration features.

Voter Registration makes it so that voters are required to put in a Name and Email (or unique ID) in order to cast their ballots. Each ID can only be used to cast one vote. Subsequent votes from that ID are blocked. As votes come in, you'll also be able to see who has voted so far.

Combined with the Allowed Voters feature, you can effectively restrict a contest to just members of your organization. Allowed Voters takes a list of comma-separated IDs and only allows those IDs to participate (e.g. fred@example.com, fred1984, id-252742). As votes come in, you'll be able to see who has voted, who hasn't voted yet, and your overall "turnout" for your contest, decision, or election.

Most contests have well-behaved voters. But, every now and then, you may get one (or a few) that keep voting to drive up the numbers for their preferred choice.

Duplicate Voter Monitoring will let you know if RankedVote suspects that the same device was used to cast more than one ballot. Any duplicates will show in the Potential Duplicate List with the Name and ID of the voter — allowing you to determine whether this is expected, an honest mistake, or someone misbehaving.

Deduplicate Results will remove the duplicated ballots from your contest's results. This means it keeps the first vote from a device and then ignores all subsequent votes.

This allows you to define the day when votes will no longer be accepted. So, if you set the date as June 21st, voters will see a "This election is closed" message starting on that day. The last day they could vote would be June 20th. Time zones can also cause some confusion here as your voters may be distributed across the world.

Tip: If you just want to stop an election from receiving further votes, click the "Close election" text and all future voters will be blocked.

You can create elections that cater to specific linguistic communities. The voter Ballot, Thank You, and Results pages will display in the selected language for all visitors to that election. English is the default. Other supported languages include:

By default, the Results page is open to anyone with the link to see. If you want to keep that closer to the vest for any reason, set Results Visibility to "only contest creator."

Bring your candidate profiles to life with a photo. Typically, this is the candidate's face, but it can also be used for voting on candidates that are visual in nature (e.g. an art contest).

Embed on Your Site

Bring all the ranked-choice calculations, visualizations, and explanations of RankedVote directly into your website. No asking your visitors to go somewhere else. Keep them on your website engaging with your content. Check out the Embed RCV guide to learn how.

The Action Banner is effectively a compelling "banner ad" that appears throughout the post-voting experience. You can direct voters to your social media accounts, online storefront, donation page, or anything else you choose. Whatever you want to grow, you can now use ranked-choice voting contests as the hook.  Customize the text, button, and link to drive voters towards whatever next step you desire.

Color can be changed to better match your group's brand. The color replaces RankedVote's usual purple on the Ballot, Thank You, and Results pages as well as the "Action Banner" that appears on those pages.

You can select any hexadecimal value (a common way for websites to define color). For example, RankedVote's purple is #7540EE.

See what real US Federal Elections would look like if ranked-choice voting were available. Pull in candidates from any primary or general election since 2018 and put them on a ranked-choice ballot.

In RankedVote, you can simulate your own Final-Five election by creating an advanced election and its candidates. Then, select "Final-Five" as a Ballot Type. Once you confirm, RankedVote will spend a few moments creating the primary and general elections and linking them.

The winners of the primary election are the only candidates available to voters in the general election.

"Final-Five Voting" elections on RankedVote are made in partnership with the Institute for Political Innovation.