How Does Ranked-Choice Voting Work?

How Does Ranked-Choice Voting Work?

Our brains are wired to rank.

All day long we rank the choices placed in front of us. Which coffee to get? Which ice cream to choose? Which shirt to buy? Typically, we navigate the choices, form preferences, and make a decision. If the black shirt you wanted isn’t available in your size, you go with the charcoal gray instead.

For a voter, ranked-choice voting works exactly like that.

Ranked-choice voting allows you to show the strength of your preference amongst a set of choices. You order your choices from most preferred to least and cast your vote. That’s all there is to it.

With this approach, your vote has a higher chance of influencing the outcome. Your vote is better represented. Your voice is better heard. All it takes is using that ranking muscle that you’re already flexing throughout the day.

The Mechanics of Ranked-Choice Voting

How a Ranked-Choice Voting Election Works

Voters rank their candidates on a ballot

Every election starts with its voters. In an election using ranked-choice, voters are able to state their preferences beyond the typical "pick one from the list" on a ranked-choice ballot.

This ballot can take a variety of forms. The critical component is that it allows for sequential candidate preferences to be declared.

In RankedVote, you can use two different ballot types: Drag and Drop or Grid.

"Drag and Drop" allows voters to put their top choice on the top of the candidate list. Second just below and so on. It's great for introducing the concept of ranking candidates.

"Grid" simulates the paper ballots that voters use in Maine, New York City, and Alaska. It allows voters to select their top candidate in the leftmost column and up to a total of five candidates in the columns after. It's great for getting voters familiar with what to expect when they enter the ballot booth for real.

Whether in RankedVote or a real ballot booth, once voters have filled out their ranked-choice ballot, their job is done. 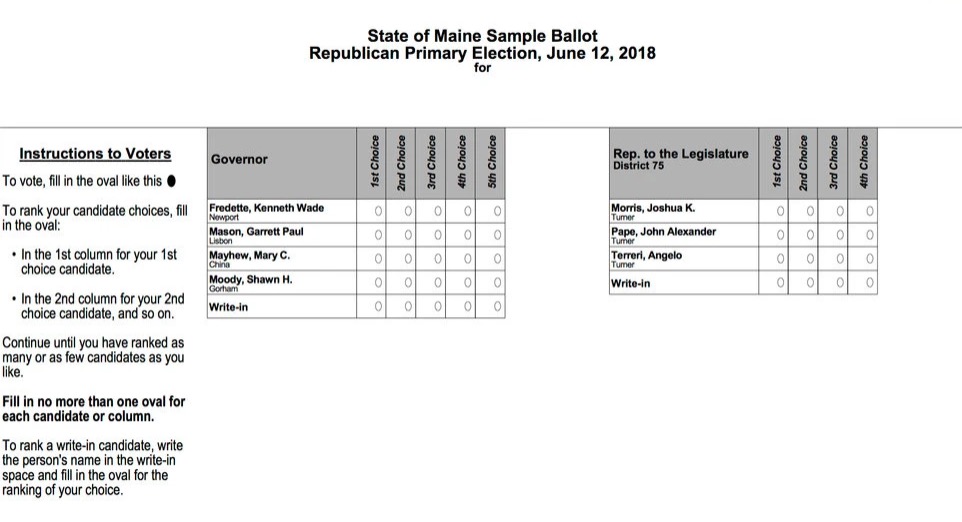 Votes are counted for each candidate

If there were 25 voters in that election, then "Candidate A" would have an outright majority (15 of 25 or 60%). That's great! "Candidate A" clearly has the strongest support across all voters and is the election winner. The ranked-choice result is the same as that of a "most votes wins" election.

But what about when it's not so clear? Any time there are more than two candidates, it's highly likely that no candidate gets an outright majority.

This is where ranked-choice voting shines.

The purpose of ranked-choice voting is to determine who has the strongest support amongst all voters — ideally a majority. When no candidate has a clear majority after counting the votes, the least viable candidate is eliminated from the running.

Lowest vote getters are eliminated (if no winner is found)

The candidate with the least first ranked votes is eliminated. Any voter whose first choice was eliminated now has their vote count for their second choice.

Note: If multiple candidates have the same "lowest vote count" or are below a certain viability threshold, they may all be eliminated simultaneously.

Votes are redistributed to next ranked-choices

The total votes are now counted for each candidate. If still no candidate gets to a majority, the new lowest vote getters are eliminated and have any votes cast for them redistributed. This process continues until a winner is found.

A winner is found

We now have a candidate that has received the most support from all voters! The ranked-choice elimination and redistribution process revealed who had the broadest support when it wasn't initially clear.

A winner gets a majority (highlighted in green).

There's no better teacher than experience. Vote in the "Best Fast Food Burger" contest below to get a feel for how the ranked-choice ballot works. Make sure to click on "Results" after you vote to see the current winner.

The ranked-choice ballot itself is a fuller representation of voter preferences. But, what's particularly impactful are the behavioral changes ranked-choice causes in voters and candidates.

Voters are free to vote for their most preferred candidates without fear of wasting votes. They stop playing pundit ("Should I vote for who's most electable?") and reveal who they think would be best.

Candidates have less incentive to "go negative" or "scorched earth" on their opponents as they might lose much needed second-rank votes.

And more candidates have an incentive to run in the first place as they no longer act as "spoilers" in the race by drawing votes away from a similar, but more popular, candidate.

All together, it means more choice, better representation, and more civil campaigns.