How to Use RankedVote for Voter Education

Millions of Americans use ranked-choice voting. New York City uses it for all citywide races, including mayor. Nearly two dozen cities across Utah use ranked-choice for municipal elections as well. Alaska uses it as of the 2022 election cycle.

And let's not forget Maine, San Francisco, and the many trailblazing jurisdictions that have used ranked-choice voting for years.

Ranked-choice voting is the future of voting in America. But, as with any reform, it takes a little getting used to. Giving voters a chance to practice ranking their choices prior to Election Day is critical to ensuring a smooth transition.

Why Use RankedVote for Voter Education?

Quite simply, it's what RankedVote is built for.

Educates at Every Step
From the ballot to the real-time results, RankedVote walks voters through exactly what's going on during a ranked-choice election.

Clear directions and an uncluttered layout make ranked-choice voting approachable. If a voter makes a mistake (like ranking a candidate twice), real-time feedback appears showing the voter how to correct the mistake — preparing them for when they enter the real ballot booth.

After submitting a ballot, voters are directed to a preliminary results page that shows how the ranked-choice calculations play out. An interactive visualization allows voters to feel each round's eliminations and vote redistributions. The explanation section spells out exactly what's going on and answers questions like "Who won?" and "What's a round?" It even compares the results of this ranked-choice election to how it would have played out with a more traditional "most votes wins" approach.

Accessible to Many Voters
The less barriers there are to voting, the more people vote. When it comes to online platforms, those barriers can take the shape of device compatibility, language, color contrast, and more.

RankedVote works on any modern device with a web browser and internet connection. It's a web application built to web standards. That means all you or your voters need to do is go to the link. That's it! Whether voters are on an old Samsung Galaxy phone or a brand new iMac, RankedVote will load and adapt its display to the voter's device.

Even better, voters don't need to create accounts or download an app. They just go to the link and vote.

Voters can even select their preferred language from over a dozen languages beyond English and six Alaska Native Languages.

And, all voter pages in RankedVote are designed and with an eye to accessibility standards for color contrast and screen readers.

In practice, this means that RankedVote works for your voters no matter who they are or whether they're at home, at the office, in line, or at a bus stop.

Trusted by the Largest Ranked-Choice Voting Education Initiatives
RankedVote was a key component of the $15M voter education effort that took place across New York City in 2021. Tens of thousands speaking over 15 languages practiced ranked-choice voting prior to election day.

You can configure these settings on the "Election Details" page for your election on RankedVote.

The most important thing is to make sure that Grid is selected as the Ballot Type. The Grid Ballot is designed to mimic the real-world paper ballot used in Maine and New York City.

The second most important thing is to make sure that Voter Registration is set to "Off." This is the default for any new election, so it's doubtful you'll need to take any action. But, if it's set to "On," voters will be asked to enter a Name and Email prior to voting. This can lead to a significant drop off in ballot completion.

You can enhance the realism of the election by including a Group Affiliation (e.g. Democrat, Independent) with each candidate as well as an in-depth Description with policy positions, biographical data, or anything else you want to include.

The Language for the election can also be customized to any of over two dozen languages. This will cause the Ballot and Results pages to load in that language by default for voters. Great for educating voters whose primary language is not English.

Lastly, to optimize engagement, you can embed the election directly on your website without having to send your voters over to RankedVote. 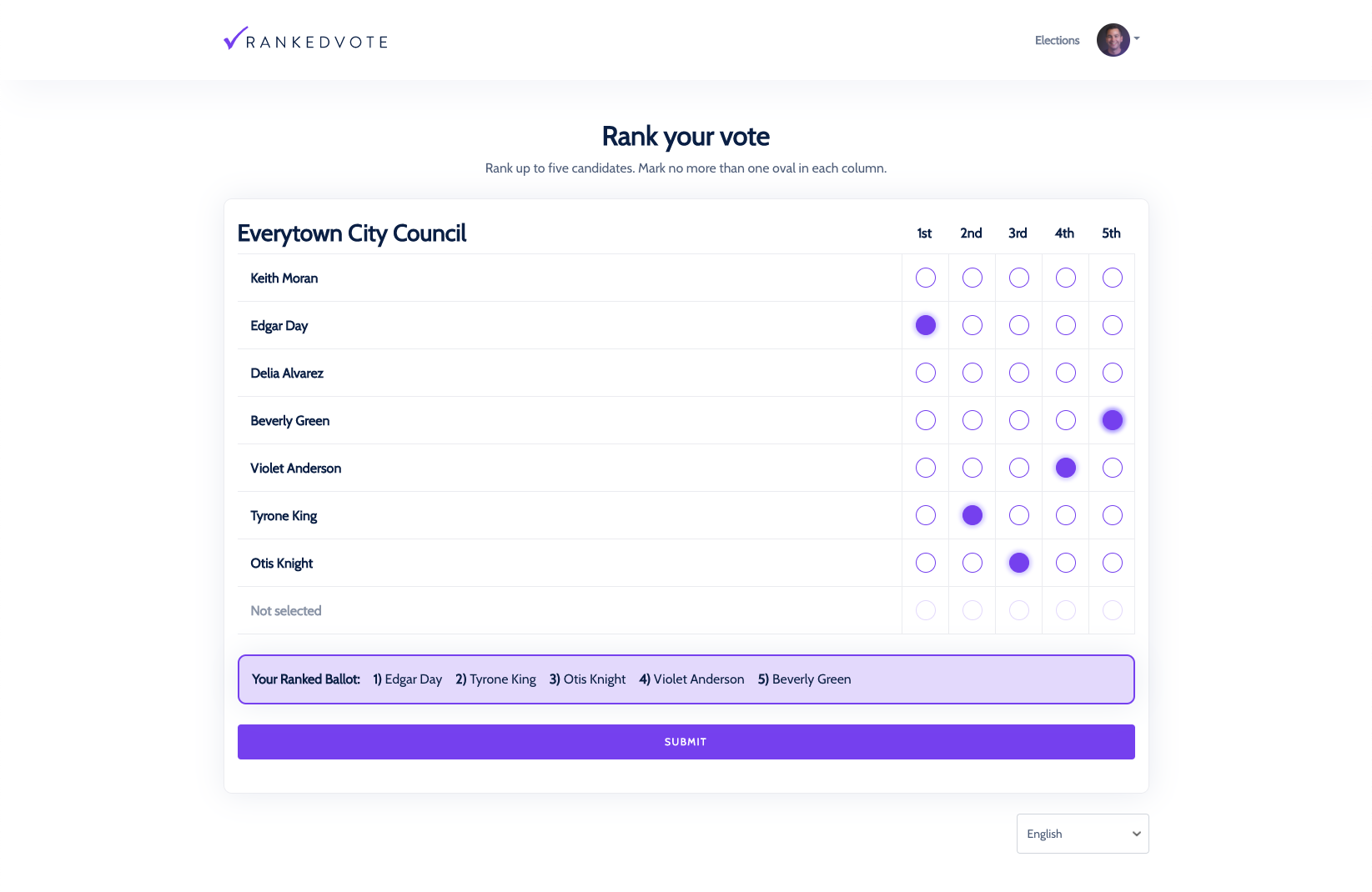 The "Grid" Ballot as seen on a desktop computer

Practice makes perfect. But real elections only come around once, maybe twice, per year. RankedVote allows you to create a low-stakes environment where voters can "get their reps in."

A common technique is to start with simple elections like "Favorite Fruit" or "Favorite Ice Cream" to get people acclimated to the process. Then, you can run a more true-to-life training by using candidates from past elections.

When it comes to behavior change, it's better to engage a small group deeply than a large group lightly. Yes, it's more work. Yes, it takes longer. But, when people see others in their "in group" participating in something new, they become more receptive to that change.

Identify specific communities you want to target. This could be by age, language, common interest, or anything else shared amongst that community. Then, look for a relevant question or topic to build an election around. It could be something going on in current events or pop culture. It could be a point of local pride. It could even be something controversial.

DemocracyNYC has made community engagement core to their education effort in NYC. Check out the example elections they've created to engage with the many distinct linguistic communities that thrive across New York City.

Have Fun With It!

Don't take yourself too seriously. Think of topics that will get people to engage with the content. Better yet, think of what will get them to share the election with their friends.

Rank The Vote NYC has done a superb job of this — running elections to see which black leader should be on the $100 bill and discovering their followers' favorite Asian noodle dish (Note: This is actually a combination of having fun while engaging specific communities).

Previous
Running a "Best of" Contest
NEXT
Making Business Decisions