How to Calculate RCV with SurveyMonkey and Microsoft Excel

What is Ranked-Choice Voting?

Ranked-choice voting is a voting system where voters can select their most preferred choices on a ballot – first, second, third, and so on – instead of just voting for a single choice. If no candidate receives enough first ranked votes to win a majority, the lowest vote-getter is eliminated. Anyone who voted for the eliminated candidate has their vote redistributed to their next ranked choice.

This elimination and redistribution process repeats until a choice receives enough votes to win.

Why use Ranked-Choice Voting?

Any time you're making a decision with more than two choices and where voters have equal say, ranked-choice voting is the right tool for the job. It uncovers preferences with greater accuracy and fidelity than traditional voting methods.

Step-by-Step Walkthrough
Estimated Time to Complete: 2-5 hours
Depending on number of candidates and voters

Determine the decision that needs to be made

The first step is to get crisp on what decision needs to be made. Ranked-choice voting works great in situations where you’re making a decision amongst a group of people with equal say. Groups like teams, organizations, and fan communities. This makes it differ from techniques like “weighted voting” or “100-point exercises.”

Once you know the decision that needs to be made, it’s time to start creating the form.

Once you’re through the account creation and onboarding wizard, you’ll want to “Design Survey” and make sure you’re on the “Build” tab. Give your survey a title. This should be the decision you’re trying to make (e.g. “Favorite Fruits” in the example screenshot).

NOTE: This question type is a paid feature of SurveyMonkey. You’ll also be limited on the number of responses you can collect.

In the “Enter your question” field you can either repeat the title (“Favorite Fruits”), include directions (“Rank up to 5 choices”), or leave it blank by putting in “...” or other placeholder text.

The choices will be the Rows (e.g. “Strawberry”) and the Columns the ranking position (e.g. “1st”). This both more closely mimics the real-world ballots and helps with running the ranked-choice calculations later on.

Uncheck the “Use weights” check box. This will simplify the eventual data export. It’s also more aligned with the spirit of ranked-choice voting.

NOTE: The purpose of ranked-choice voting is to determine which choice an individual voter’s one vote counts towards. It’s not about dividing up points amongst multiple choices or showing the intensity an individual voter feels towards a specific choice.

Check the “Forced ranking” check box to ensure your voters don’t mark multiple choices with the same rank or one choice with multiple ranks. 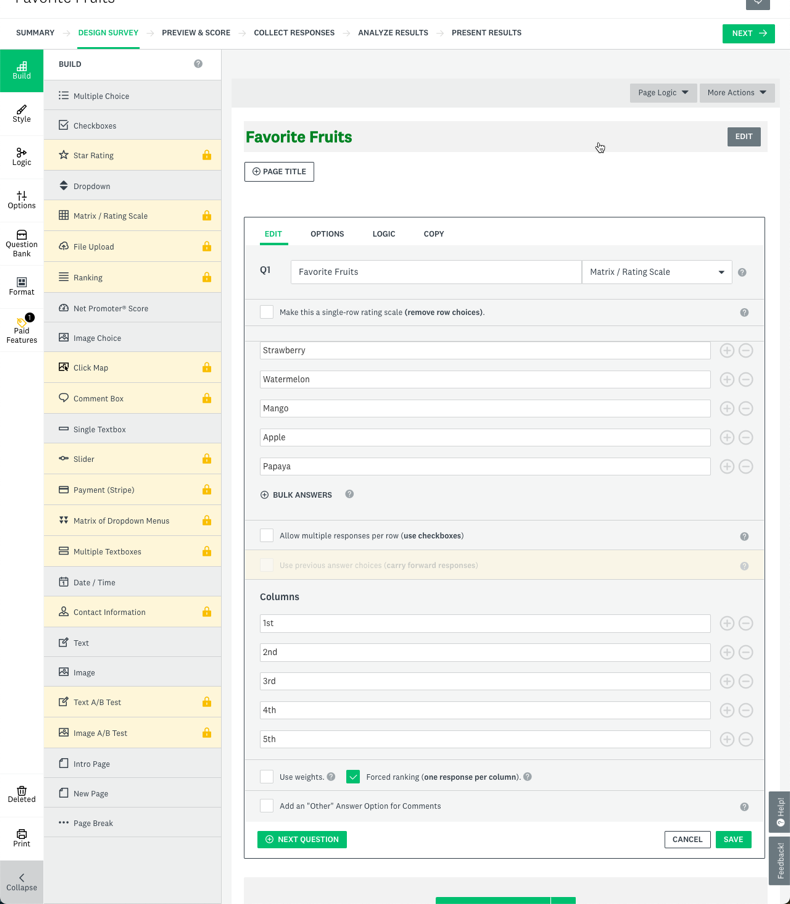 You’ve now got a ranked-choice form ready to go! Time to send it to your voters. Click the “Share a survey link” button in the upper left. It’s the most versatile option and can be placed wherever you need. SurveyMonkey also allows for other methods, but many of them are paid options only.

As voters fill out the form, you’ll see the results show in the “Analyze Results” tab. 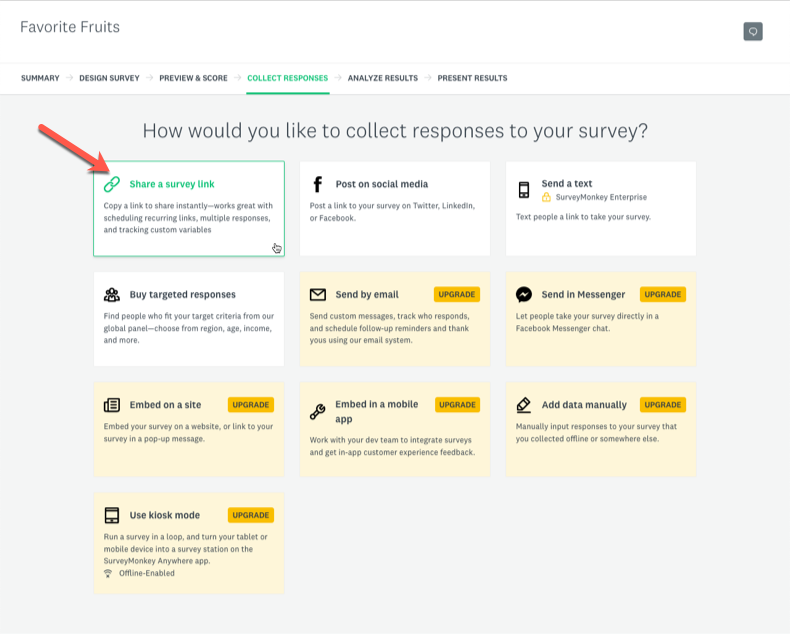 Get the Response Data into Microsoft Excel

Once all the votes are in, it’s spreadsheet calculation time! 🎉

Click on the “Analyze Results” tab in SurveyMonkey. In the upper right, there’s a green “Save As” button. Click it and then go to “Export file” and then choose the “All individual responses” responses. 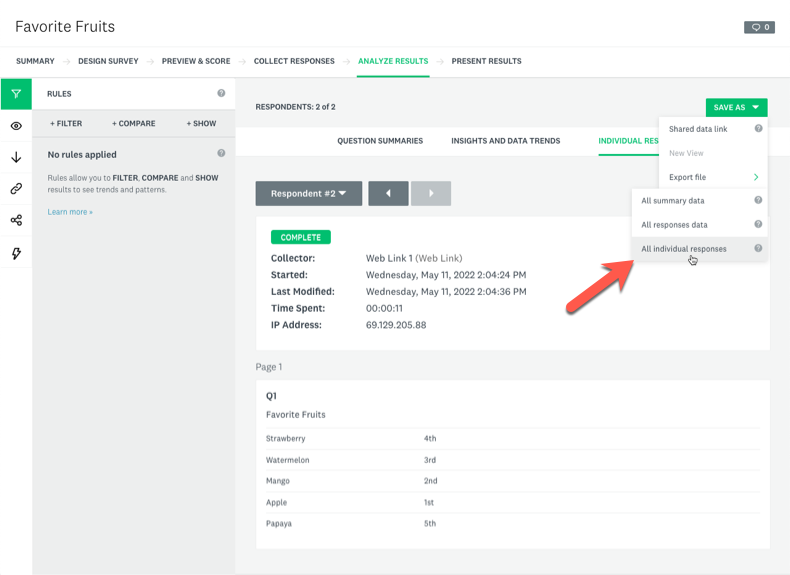 You’ll then get a download screen. The following options work best: 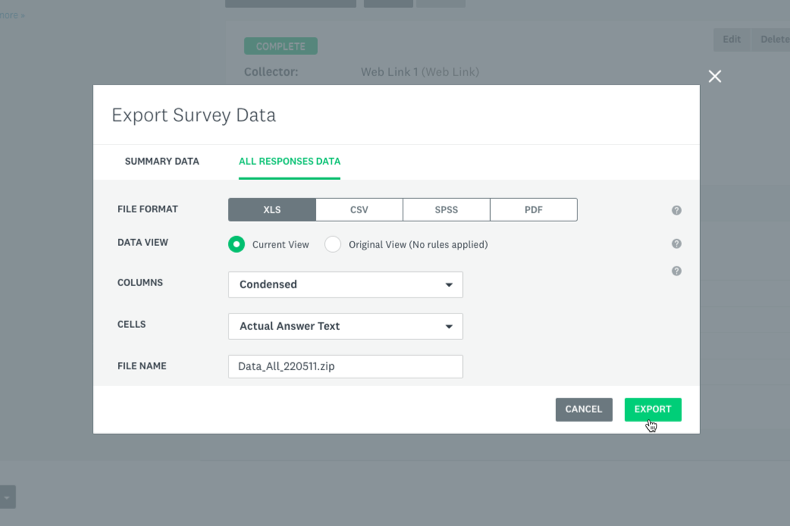 Export the data from SurveyMonkey with these settings

After clicking the green “Export” button, a ZIP file will download to your computer. Unzip it and a folder titled “Excel” will appear. Inside that folder is a file called “[Your Survey Name].xlsx (e.g. “Favorite Fruits.xlsx” in this example).

When you open the file, it should look something like this… 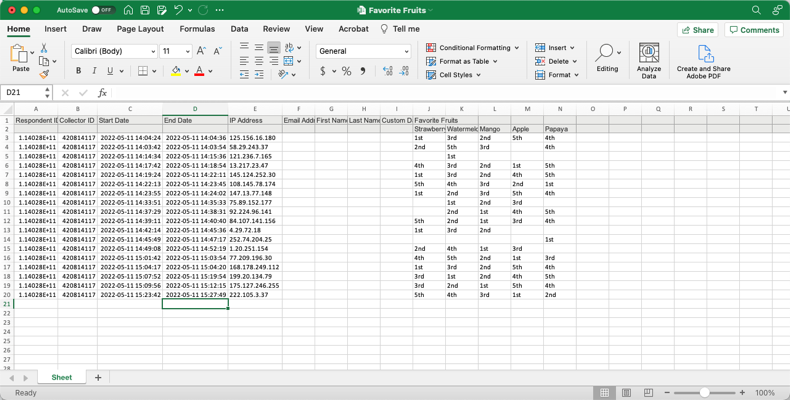 The raw survey data as it appears in Microsoft Excel

This example has 18 votes. Each row represents a voter’s ballot. Each column after Timestamp represents that voter’s rank for each candidate. Some cells are open, which is fine. This just means that the voter didn’t rank all the options on that ballot.

If all is looking well, duplicate the sheet. To do this, right-click the tab in the lower left called “Sheet” and then select “Move or Copy.”  Then choose “(move to end)” and make sure the “Create a copy” checkbox is checked before clicking “Ok.”

Rename the new sheet “Round 1.” It’s best to leave “Sheet” untouched in case any mistakes are made later. This way, there’s always a way to get back to the original raw data. If you want, you can rename “Sheet” to something more informative like “Responses” or “Original Data.”

Determine how many votes are needed to win

The point of any ranked-choice voting round is to determine a winner. But, what does it take to win?

A core idea of ranked-choice voting is that the winner should have majority support from the voters. For a single-winner election, that means 50%+1. To win this example election, the winner needs 10 votes (50% of 18 is 9. Plus 1 is 10).

Now that all the votes are in and a winning threshold has been determined, we can start the calculations. Round 1 is relatively straightforward as it simply involves adding up all the first ranked choices each candidate received.

To make the spreadsheet able to be added up, you’ll do a “Find and replace” of the text “1st” and replace it with just the number “1.” Microsoft Excel ignores any text-based cells, but will add up any numeric cells in a column. 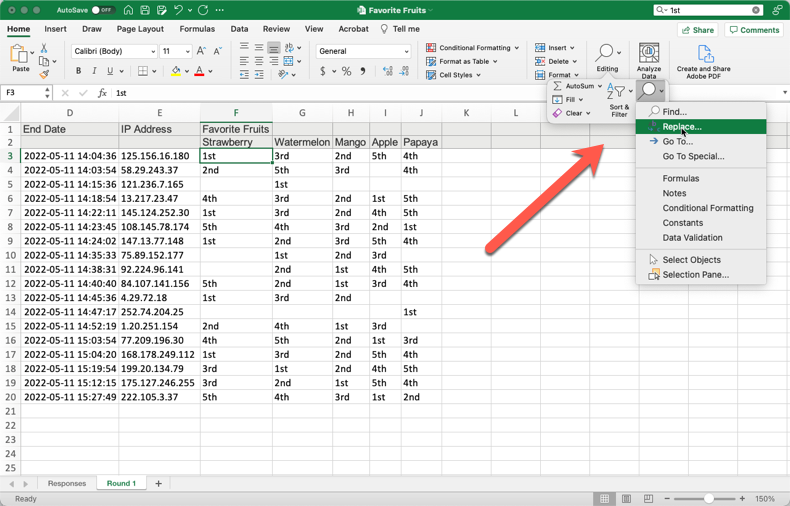 Use "Find and replace" to make changes in bulk

From Home click “Editing” > “Find and Select” > “Replace” to bring up the menu. Fill it out like in the image below. It’s very important to make sure the “Within” field is set to “Sheet” so that you don’t impact the original voting data. Then, hit the “Replace all” button. You should see that there were a number of instances of “1st” replaced. Click “Close” to finish. 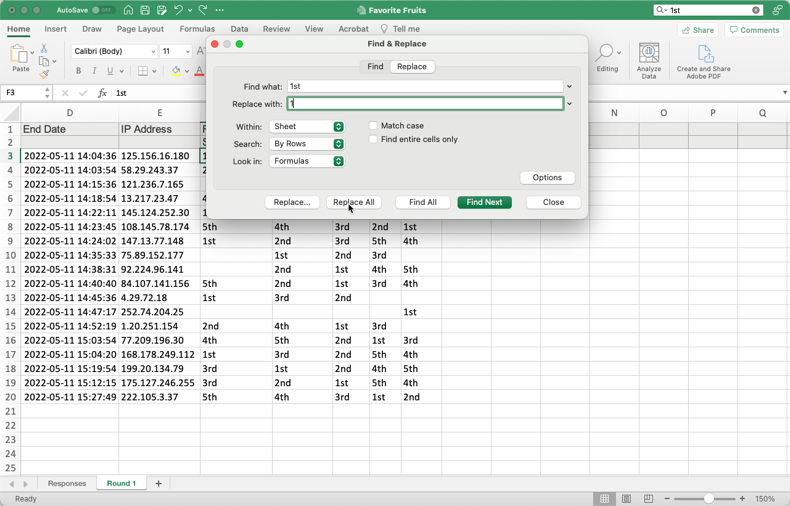 The columns can now be added up. Clicking the column header will automatically display the Sum in the lower right corner. That’s a quick way to get a read on the vote totals for each candidate and if any of them managed to clear the winning threshold in Round 1.

However, chances are that didn’t happen. A more enduring solution is to create a cell with the vote totals at the bottom of each column. This way you can see the vote totals for all candidates at once. It will also come in handy as you get to later rounds.

The SUM function is your friend here. Type in =SUM(FirstCell:LastCell). In the example, this would be =SUM(F3:F20) to get the total for the candidate named Strawberry. Then copy/paste or fill right to get the totals for the other candidates.

You’ve now totaled up the votes for Round 1.

If a candidate gets to a majority, you’re done. The ranked-choice calculation doesn’t kick in because you’ve got a candidate with clear majority support. But, any time there’s more than two choices there’s a good chance you’re going to end up needing to perform ranked-choice eliminations and vote redistributions.

Look at the totals for each candidate. Find the candidate with the lowest votes. Change the background color of that candidate’s column to a shade of gray. This is the candidate whose votes need to be redistributed at the start of the next round.

Duplicate the “Round 1” sheet and then rename the new sheet to “Round 2” at the bottom of the spreadsheet. 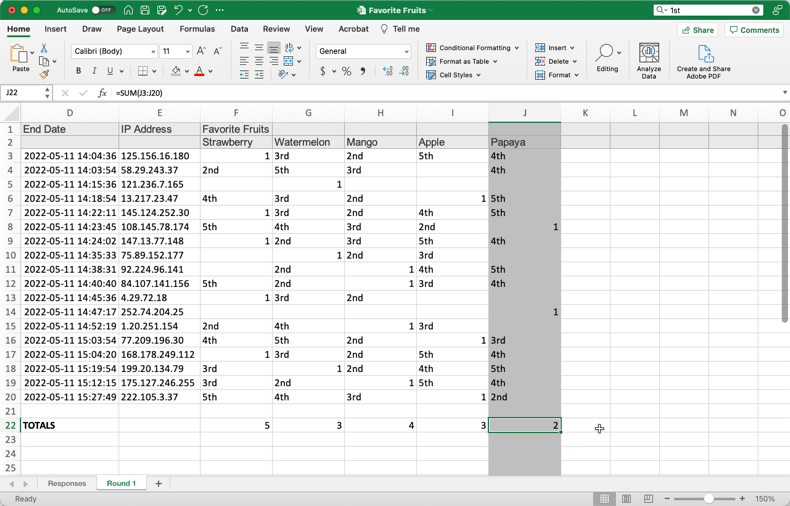 Round 1 Results in Microsoft Excel

The elimination and redistribution process below will be repeated for as many rounds as necessary until a winner is found.

This is the core of ranked-choice voting. As candidates are found to be unviable, they are eliminated. But, people who voted for that candidate still have a shot at having their preferences reflected in the eventual result. No wasted votes. No penalty for voting for your favorite even if it wasn’t likely to win.

Back in the spreadsheet, you’ll redistribute the eliminated candidate’s votes to each voter’s next ranked-choice. Here’s how…

First, replace every occurrence of “1” in the eliminated candidate’s column with “0.” Then, looking across the row for each “0,” find that voter’s next ranked-choice. This will be the highest rank you see in any column that isn’t grayed out (because that denotes this candidate was eliminated). Replace the text in that cell with “1.” You have now successfully redistributed that vote.

Once you’ve redistributed all the votes, look at each candidate’s totals. If a candidate reaches the winning threshold, you’re done. If not, highlight the lowest vote-getter’s column. Duplicate the sheet. Rename the sheet for the next round. Repeat. 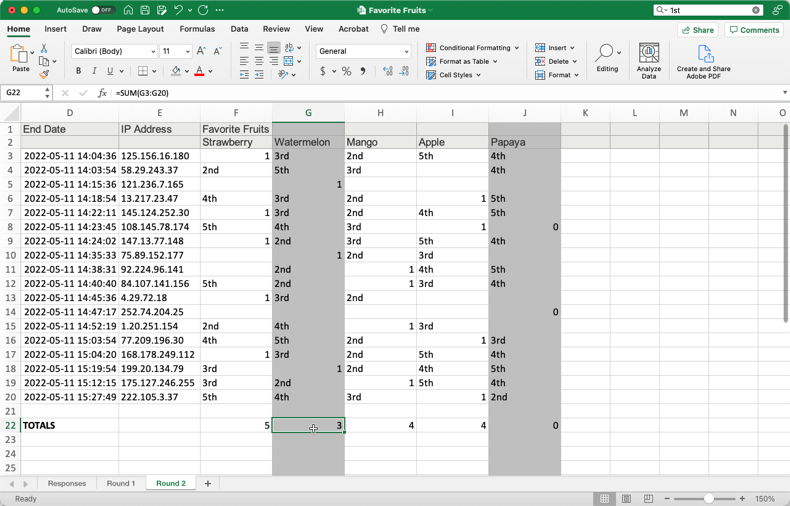 Round 2 Results in Microsoft Excel 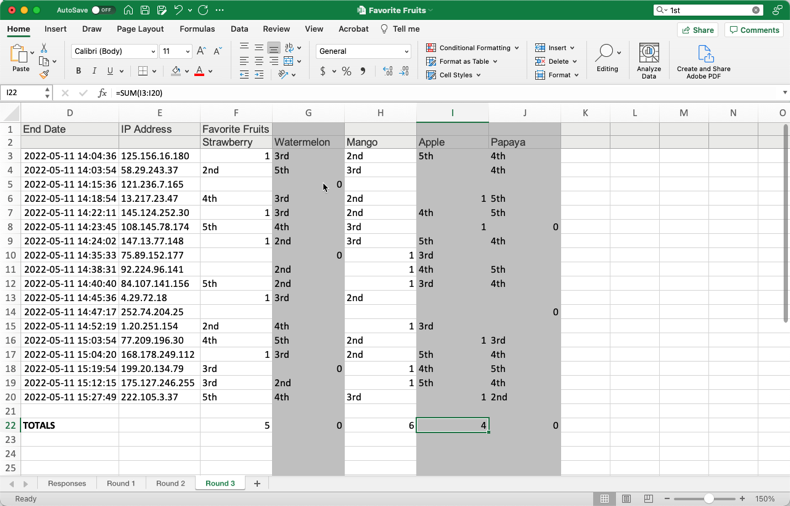 Round 3 Results in Microsoft Excel

Apple is the lowest vote-getter from Round 3. Its votes are redistributed to next ranked-choices. Mango reaches the winning threshold of 10 votes. We’ve found our ranked-choice winner! 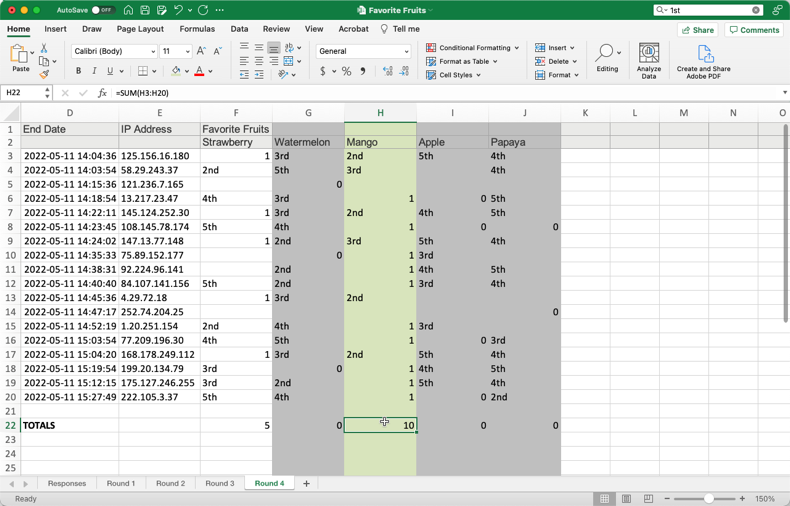 Round 4 (Final) Results in Microsoft Excel

Observations on the Example Election

If you’re squinting your eyes looking at the example data, you may notice a couple interesting things going on:

It turns out that Strawberry had a strong initial showing, but no breadth of support beyond its first rank voters. In a typical “most votes wins” election, Strawberry would have won with just under 28% of the vote. With ranked-choice voting, the underlying preference of the majority of voters for something other than Strawberry is revealed.

You can see in the initial data that some voters did not rank all five candidates. Some only ranked one. Then, that candidate was eliminated.

When a voter has no more ranked choices left, the vote becomes “exhausted” or “inactive” and is not included in later rounds. That’s why, as a voter, it’s always in your best interest to rank as many choices as you can.

How long will this take me to calculate?

The above example was on the very simple end of the spectrum. Only 5 candidates, 18 total votes, and no tiebreakers. Following this guide, you’d likely spend between 20-30 minutes on it.

But what if you had 12 candidates? 150 votes? Encountered tiebreakers? You’re now talking about multiple hours of tedium.

To make that more tangible, with 12 candidates you’ll likely end up having 11 rounds of eliminations and redistributions. With 150 votes, you’ll be scrolling up and down the spreadsheet (and 12 candidates will also have you scrolling left and right). If there’s a need for tiebreakers to determine who gets eliminated, then that may be a whole other set of calculations depending on how you choose to handle it.

Or…you could use RankedVote and have the results calculated instantly. 😉

How do I handle ties?

What if no candidate reaches the winning threshold?

This can happen due to exhausted votes. In this scenario, the ranked-choice winner is the candidate in the final round with the most votes. While this doesn’t quite get to the stated goal of majority support for the winning candidate, ranked-choice voting is still uncovering the candidate with the broadest support amongst all options.

Create your own ranked-choice elections, contests, and polls with RankedVote. Trusted by over 15,000 people. Get started in minutes...for free!